The Porsche 550 Spyder of the 1950’s. Rarely has a purpose-built sportscar rendered so much international acclaim and praise for its ‘Giant killing’ abilities alongside outright victories of some of the most demanding and challenging races (most notably its win in the 1956 Targa Floria) of the era from which it was conceived. But that it was also remembered as being a poster-child for a high-profile (and seemingly, cursed) city-to-city ‘Speed Kills’ campaign in the USA (after movie-star James Dean’s death in his ‘Little Bastard’ 550 Spyder) only further serves to inflitrate the mysterious and legendary effects that the 550 had on not only the racing scene and the general public, but also on the future of Porsche as a marque that had undeniably made its mark on the sportscar scene. 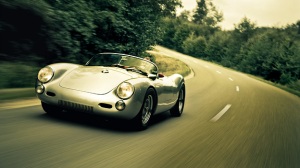 Only 90 examples were made between October 1952 and June 1956 with the first four cars going to Porsche KG for testing and racing. The first 2 two examples bore removeable hardtops to aid in aerodynamics whilst racing against the other Motorsport leviathans of the time – namely the Jaguar D-types and Mercedes 300 SLRs – and upon the first race of the 1953 season at the Nurburgring (in appalling conditions), the 550 won outright in its very first race. A month later at Le Mans, both cars were entered and won their 1500cc class, ending up 15th overall. 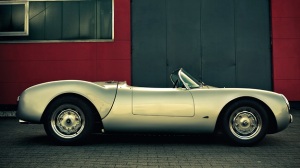 All 550s were built by hand and saw them borrowing parts from its 356 predecessor and Volkswagen during its build-evolution. Subsequently, each 550 made over the years received gradual improvements and upgrades along the way. Power for those first handful of cars originally came from the 356’s 1500 Super engine that was good for up-to 100 bhp, but eventually the reliably robust type-547 1498cc 4-cam engine, built by Ernst Fuhrmann, would come to readily power the 596 kg lightweight 550 with its larger bore and shorter stroke.

Eventually, after a couple of years spent refining both the body and the mechanics of the 550, work was commissioned in 1955 to coachbuilder Wendler of Reutlingen, Germany to build 69 road-going examples for privateers, 33 of which would be bound for the USA. The 550 Spyder (renamed from ‘550 1500/RS’ to ‘550 Spyder’ by an American, for the American market) would continue on with racing success at the hands of such legendary drivers as Stirling Moss, Hans Herrmann and Richard von Frankenberg to name but a few, claiming multiple victories with the 550 during their racing careers. 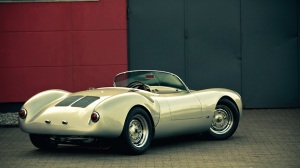 The 550 represented Porsche’s proper entry into the world of International Motorsport and was responsible for the introduction of the ‘RS’ Renn Sport (‘motorsport’ in German) moniker that has been attached to every road-going, limited ‘Hot’ Porsche ever since. Yet most importantly, the success of the 550 resulted in the furthering of Porsche’s Motorsport division throughout the 1960’s and onwards which, as we know, laid the foundations for such incredibe creations such as the 917 and 956 racecars of later years. No surprise then that 550 Spyders exchange hands nowadays in the $1-million+ arena… A true legend, it will always be.
-Blake J.
AutoInjected.com

Our Spotlight/Pic-of-the-day comes courtesy of this gorgeous 1964 Alfa Romeo TZ (Tubolare Zagato) Racecar that was developed and built jointly by Zagato and Auto Delta (Alfa Romeo’s Competition Department). The TZ was a purpose-built racecar that utilised a tubular spaceframe chassis clothed in lightweight, all-aluminium body panels that assisted in keeping the overall weight down to a scant 660 kg – That’s nearly half the weight of a Mazda MX-5…

With such feathery weight to propel the TZ, ample power delivery was relied upon a throaty, twin-spark 1.6L inline-4 cyl. engine that chucked out a healthy 160 bhp and enabled the TZ to reach 135 mph. Independent suspension and disc brakes also aided in stability during the varying styles of races it entered throughout its competition-based life. 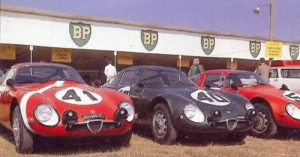 Le Mans 1964 with the other competing Alfas awaiting the start

This exact TZ (pictured) was the 2nd of the non-prototypes to be built. Completed on April 2 1964, just 24 days later it was entered into the Targa Floria where it finished an impressive 3rd overall. Two months later it saw action in the Le Mans 24 Hours where it finished 15th overall – not too shabby for a 4-cyl Alfa Romeo. 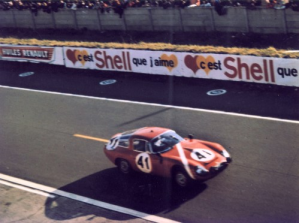 From there it was raced throughout the late-’60s until 1967 when its owner, Giancarlo Sala, decided that even more weight could be shed from its shell in the quest for greater performance. How he went about doing this though, remains a questionable (yet characteristic) note on the ‘add lightness’ scale. 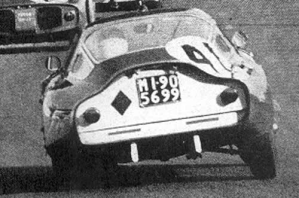 After watching bare aluminium Porsches compete (and win) at the Nurburgring, Sala decided to completely strip this very TZ of its paint, both inside and out, exposing it right down to the bare aluminium. He even sanded down the aluminium itself to reduce the thickness in his quest for lessened weight. He probably shaved off a few kilos by doing this. Amazingly, the TZ pictured here remained in its bare-aluminium shell until July 2010 when it was completely restored back to its original Le Mans livery/colours. 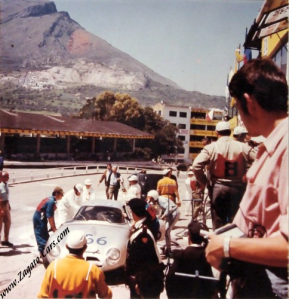 Sala at the 1969 Targa Florio with the bare-aluminium TZ

Everyone requires a mandatory video-break throughout the work-a-day so here we present you with a varying hodgepodge of selections that run from the odd to the old to the personal portrait to the importance of friendship and comaraderie within motoring circles.

Metal Heart – Captured at a Monster Truck Event, this strange little video manages to reflect a miniaturised, toy-like, clay-mation world back to the viewer. My favourite bit is the supposed Smash-up Derby

The Bond – Some of you may have already seen this video when it emerged a few months back but for those that haven’t, it’s worth your time. An intimate and beautifully filmed portait detailing why the most important vehicle purchases in life come from the heart.

Rattling the Hills in a Spyker – This video remains a personal fave of mine, as I’ve been fortunate enough to have driven these exquisite roads throughout the Scottish Highlands in various TVRs from years past. Shown here is a Spyker C8 blatting across the landscape and I can assure you, the Spyker sounds every bit as roaringly delicious as the soundtrack delivers it to be… I implore you all..! Go to Scotland and drive the western coastline..!

A Pinch of Salt – One from the Bonneville Salt Flats Annual Speedweek. An honest look at the camaraderie and life-long friendships that permeate throughout this event where the record books are an afterthought and helping your fellow mate achieve his/her own goals reigns supreme. Again, beautifully shot.

Targa Florio 1970 – Excellent period commentary from Vic Elford from one of the last times the Targa Florio event was run before it ended. Amazing footage. Of noteworthy sights are various scenes where Alfa Romeos, Ferraris and Porsches are being driven at full speed throughout the tiny villages while small children stand in awe, chickens stroll about and elderly gentlemen engage in card games on the immediate roadside with cars blasting past them, unguarded, at truly ferocious speeds. An essential glimpse from a time we’ll never see the likes of ever again.