From within the vast, long halls of the Better-left-unsaid files of American motoring comes this: The truly terrible ’74-’78 Mustang II.

When the fuel crisis of the early-’70s sounded the inevitable death-knell for big-block, mega-horsepowered V8 engines within the automotive industry, Ford was in the same camp as everyone else by initiating the fleet-wide downsizing efforts and subsequently harsh, power-sapping emissions controls that basically choked and neutered any ‘performance’ that may have existed in the first place. Gone was the 100-octane fuel and 325+ bhp Cobra Jet engines of recent latter days and in place was 87-octane lighter-fluid powering an asthmatic Pinto-sourced 4-cylinder engine dispelling a horrifically depressing 88 bhp. If you craved more power (and you would), Ford could offer you up a 2.8L ‘Cologne’ V6 sourced from Ford of Europe – gee, thanks…

The first year that saw the Mustang gain a 4-cyl. engine - no V8 was on offer

Throughout the mid-1970s leading up to the early ’80s, the onsluaght of ‘fake’ musclecars (what with their fake air-scoops that scooped nothing and tarted-up graphics promising ‘exciting’ motoring) didn’t exactly help matters either. The sting of industry-wide downsizing had bitten hard and nowhere was this more evident than with Ford’s attempts to glamourize and illusion-ize the depressing fact that their Ponycar’s damaged reputation was now a mere shadow of its former self. 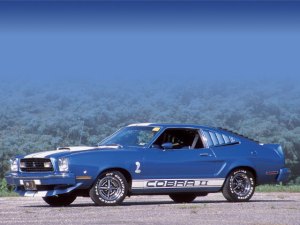 In 1975, Ford attempted to regain some of their former glory by bringing back the option of a V8 engine, but by then the 302 cu. in. motor was only able to chuck out a paltry 122 bhp – a new low for the legendary small block that had seen it carry 271 bhp just ten years earlier. The debilitating emissions equipment imposed by the Federal Government was made even worse by the fact that almost all of the American automakers were trying to gain economical fuel/emissions figures from 1960s engines – engines that were never designed for fuel economy in the first place.

Ford clung to their new creation though and marched on with this automotive catastrophe – in 1976 they introduced a ‘performance package’ option that saw a rather gaudy ‘Cobra II’ graphics pack (complete with iconic twin racing-stripes) emblazoned across their wheezing, still single-tail-piped embarrassment. 1977 saw the visuals (remember, there was no more performance) take on an even-more pronounced presence with loud, fibreglass air-dams, a chin-spoiler and a hood scoop that didn’t actually scoop anything. This was the act of dressing-up a polished turd taken to all-new heights (and lows)… Or so everyone thought….

1978 was to be the ultimate low for the ailing, burnt-out Disco days of the Mustang. With the introduction/final-blow of the ‘King Cobra’, Ford must have surmised that buyers enjoyed the feeling of looking as if they were going fast while not exactly doing so – this was a page in the Mustang’s history that saw it borrow inspiration from the flashy, decal-identifying Pontiac Trans Am of the time. GM had a flame-belching chicken splashed across the hood of its ‘sportscar’ while Ford opted for a Cobra seemingly spewing out beams of venom – good comedy, that.

The final act - The King Cobra

Mercifully, the Mustang II’s existence came to an end after the 1978 model year after 5000+ models of the King Cobra were built, leaving behind a chapter in the once-proud Ponycar’s legacy that will forever be looked upon as the era best left forgotten.