Aston Martin has released new details and photos of its forthcoming ‘Super GT’ car to replace the current DBS. It’s called the Vanquish AM 310, and aside from that sounding like a snappy new radio station on the low-frequency band, the materials used to ‘broadcast’ (sorry) this largely face-lifted, One-77-inspired addition onto the DB9 family platform are anything but mono-toned – The entire body is now clothed in carbon-fibre.

Keen eyes will also notice the beautifully-integrated rear spoiler and new wheels to go along with the more dramatic lines and pinches and bevy of creases that “represents the zenith of current Aston Martin design and engineering.” – according to the press release – which seems to signify that this is ‘the end’ of this current design language and that something anew is coming next year to mark Aston Martin’s centenary… ? Surely.

The interior appears to have been cleaned up in the dash/console area as well, which will come as a welcome benefit to those that have been flustered by the sheer onslaught of tiny switches that used-to inhabit Aston dashboards of recent times…

Full specs haven’t been released just yet, but the main headlines are that the 6.0L V12 has been uprated to deliver 573 bhp (up 56 bhp from the DBS’s 517 bhp) and an increased torque figure of 457 lb/ft up from a previous 420 lb/ft. 60 mph arrives just a couple of tenths quicker (irrelevant) than before and the AM 310 Vanquish will top out at 187 mph (again, mostly irrelevant).

Frustratingly, there’s no word on whether a manual will be offered in the gearbox/drive area of matters, but don’t count on it – The buying public appears to be fully transfixed now on everything being AutoMagic with some ‘sporty’ paddles behind the steering-wheel to flick away at with their lazy fingers when the need for evoking some ‘sporty driving’ occurs… 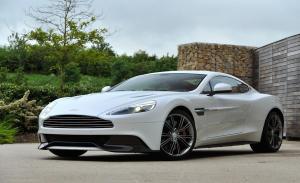 But then again, this is a GT car, so a quick-witted  ZF-based Touchtronic system is more than adequate for handling those cross-Continental blasts across the earth. Speaking of GT pretensions, the ability to carry more within the luggage area of your AM 310 has increased as well – up to 60% more space than the out-going DBS – and therefore, ample room for your golf clubs… if that’s your motoring concern.

Expect deliveries of the Vanquish AM 310 to start at the end of this year with big plans awaiting on the horizon for the next generation of Aston Martins to come…!

The current Aston Martin DB9/DBS shape is one of those automotive-landscape entities that has, undoubtedly, garnered deserved praise for its elegantly stunning and aggressively handsome design flourishes ever since its 2004 debut. It will, without fail, go down as one of the most beautiful sports/GT-cars ever made.

Just last night, during my usual evening stroll, I was taken aback by the sight of a lone, granite-grey DB9 parked up all by itself along one of the many quietly-curving, tree-lined streets that make up my old-money/Mansion-infested neighborhood. Point being, the DB9 still manages to stop me dead in my tracks and forces me to drink it all in… again… and again.

So it goes without saying that the eventual successor to the current DB9/DBS will have quite a job on its hands in keeping faithful to the beautiful mark that has been undeniably stamped onto the automotive scene. Said replacement will see the light of day sometime next year (probably) so it’s no surprise that there will be several ‘run-out’ Special Edition versions of the DB9/DBS cocktail forthcoming until then – the ‘Ultimate’ DBS, pictured, is the latest.

Only 100 ‘Ultimate’ DBS variants will be made and the features are, as usual with most run-out special editions, mostly cosmetic. Each Ultimate DBS will be individually numbered and identified by bespoke badging, loads of carbon fibre, shadowy grilles and tail-lamps, diamond-quilted stitching on your leather seats with either silver or red thread and your choice of red, yellow or black-painted calipers to complete the ‘Ultimate’ finishing touches…

Exterior paint colours offered are Carbon Black II, Quantum Silver, or Silver Fox – so basically Black, Grey or Silver. Both Coupe and Volante body styles are offered as well as either Automatic or Manual transmissions…

Not a lot to add here, really… What a gorgeous car. Love how the red pin-stripes on the tires and lower sills work so well against the grey/granite paintwork. 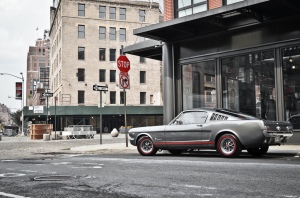 When Ford unveiled their modern-day re-interpretation of the 1960’s Le Mans-dominating/Ferrari-slaying GT40 back in 2004 (reborn as the ‘GT’), it bowled over the crowds with its beautifully similar lines and near-identical dimensions to that of the iconic original. It was little bit wider, a little bit taller (by 3 in.) and a little less lairy than that of the be-scooped, original raucous racer, but there was no doubt that Ford had nailed a winner with its supercharged 550 bhp V8 leviathan (650 bhp with some tasty Ford-sanctioned upgrades).

Accolades and group-test awards came pouring in. It even managed to bag Evo Magazine’s coveted Car of the Year acolade back in 2005, beating out the likes of a certain Ferrari F430 for the crown. Seeing as how production of Ford’s GT ended just over 5 years ago with 4,038 being made, your chance to bag one now with relatively low miles on the clock will be a relative dawdle… though, if I’m to be honest, I’d be sorely tempted to track down one of the rarer light-blue and orange GTs painted in those race-bred Gulf colours…

For those that hanker after an exquisitely-built near-identical replica of the 60’s original GT40, there’s always the South African-based Superformance who will build you one to your own personal spec and desires. I’ve always enjoyed this Fifth Gear vid of Tiff Needell blasting around South Africa in the Superformance GT40…