Ferrari is set to unveil its new F620 flagship GT at the Geneva Show in March of this year and, according to German magazine Auto Bild, it will pack quite a punch as well – about 710 bhp worth. For those of a numbers fixation, that’s more power than the new Lamborghini Aventador… 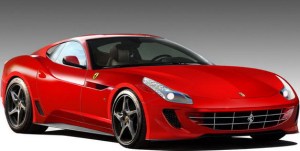 The official 'unofficial' rendering of the F620 GT

Unsurprisingly, shifting that power will come from the same 7-speed dual-clutch gearbox found in the current 458 as there will be no manual option made available (rejoice, all of you lazy, wannabe-F1 flippy-paddle mongers). I think it’s fairly safe to say that there will never ever be a manual Ferrari made again – does that not seem odd and just plain wrong to anyone else…? According to Ferrari just a couple of years back, their new mantra for future models was ‘far less weight, therefore smaller engines/less power required’…. Hmm.

From the unofficial rendering above (culled from many various spy-photos), the 599 successor appears to have gathered its front-end inspiration from the current FF. It will also share the same 6.3 V12 as fitted in the FF, albeit with a rather substantial gain in power. We look forward to its in-the-metal unveiling in March..!