POTD/Spotlight: The Mini vs. The Giants

It was a classic scenario of David meeting Goliath in the world of motorsport. An era of hugely exciting racing; the likes of which we’ll never see again. Thunderingly powerful, massive American V8’s in the form of Ford Galaxies and Chevrolet Camaros instigating door-handle (or rather, door-handle-to-roofline) battle against the tiny, lightweight and agile 4-cyl. Minis and various mid-sized saloons. This was Saloon Car Racing of the 60’s and early-70’s. This was ‘everyman’ racing at its finest… 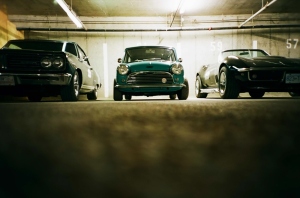 Yours truly captured this (above) photo of the Mini Cooper sandwiched between the two American Muscle cars earlier this year during a ‘Spring Thaw’ Rally that gave witness to an eclectic heard of classic pre-1980’s cars of all shapes and sizes attacking some of the finest roads of this region for 3 days straight. Myself, I was acting co-driver for my friend’s 1973 BMW 2002. It was an incredibly fun experience and I thoroughly look forward to next year’s event.

During those 3 memorable days it wasn’t uncommon to be passed by a properly-driven half-million-$ 1950’s Aston Martin DB2 followed by a scampering 1970’s Porsche 914 during one stage followed by a mountain-esque blast with a gorgeous 60’s Lancia Fulvia in behind while chasing a 70’s Firebird Trans Am the next… It was sort of like a 3-day Field Trip for grown-up Petrolheads. Truly truly unforgettable.

For those that have the time, I highly recommend viewing this slightly, er… ‘flattened’ video (the transfer from video-to-digi always seems to be problematic) of the 1971 Saloon Car Championship from the long-gone Crystal Palace circuit in the UK. Excellent footage (and sound!) of Minis, Escorts, Cortinas, Vauxhalls and big V8 Camaros going head-to-head. You’ll want to watch Part 2 all the way to the end for the classic race finish.

And for those possibly looking for something more ‘common-man’ motorsport entertainment, here we have a ‘Production Car’ race from 1975 whereby anyone – and I do mean, anyone – could sign themselves up to race with their own wheels and do battle around the track with other like-minded (ie: a bit nutty?) individulals with their daily-driven vehicles…. without any insurance. Somewhat comedy, classic David vs. Goliath material…