There are few factory-derived racecars as tauntingly beautiful and purposely outlandish as the legendary Porsche 917K series. There’s just something about its purity of voilent speed and devilishly analogue nature that *pings* directly at the petrolheaded soul and has you searching for a YouTube fix at 2am…

The Porsche 917 was originally designed as a ‘long-tale’ (917LH) but seeing as how this initial version produced rather sketchy handling at high speeds, a shorter-tailed version (the 917K) was developed to cure the high-speed instabilities at the cost of a slightly lower top speed. Based on the Porsche 908, the 917 was conceived in an alarmingly short time of just 10 months (at great expense to Porsche) and made its debut win at the 1970 Le Mans – the first-ever overall win for Porsche. It followed this win up with a 2nd overall Le Mans win in ’71. 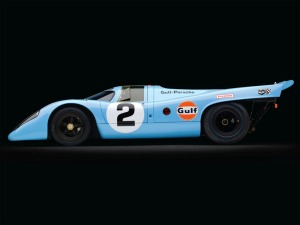 As an added little bonus, here we have a chart documenting every single 917 chassis ever made…