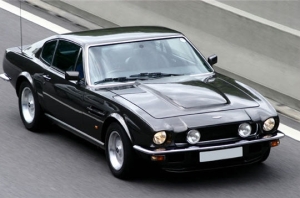 When Aston Martin rolled out Britain’s first true ‘Supercar’ back in 1977 it caused more than a stir alongside the phenomenal thrills found behind the wheel of this opulent monster. Back then, anything with the ‘supercar’ tag attached to it usually meant something low-slung, wedgy, uncomfortable and brutally fast… and most-likely adorned with the requisite pop-up headlamps. So when Aston introduced a sleek ‘n sexy, blunt-nosed coupe capable of carrying 4 passengers in luxurious comfort yet just as fast as anything Italy had to offer at the time, a turning point had been achieved. The Italian’s eyebrows had been raised…

The look and coupe-style of the Vantage was almost the polar-opposite to what had been established as the norm within the evolving (and largely Latin) supercar circles of the time. Here was an excellent handling, practical, ferociously loud (in a very distinguished, gentlemanly manner) and thuggish… well, muscle-car… that was both elegant and user-friendly. Not to mention irrefutably fast – arguably the fastest car of the day. 0-60 came up in just over 5 seconds and you had a (newly modified) 5.3L V8 churning out almost 380bhp (437bhp if you specified the pumped-up ‘X pack’ engine/sports-exhaust with yours) – a truly staggering power-output figure for the 70’s.

To achieve these monstrous power figures from their V8, bigger valves, lower-lift camshafts, a distributor remap (there’s some old-school for ya!), improved spark plugs, a skimmed head and a much larger airbox was fitted. The suspension even received a proper stiffening-up while the ride-height had been lowered (apparently) due to cut springs… (more old-school) Heck, Aston even fitted spacers out back to widen the track. This was ‘Garagista’ pipe ‘n spit engineering at its finest. 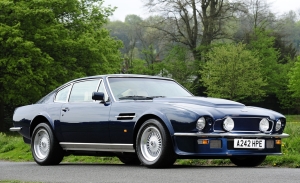 One ever-defining feature of the Vantage was its blanked-out grille, which was actually a nod to improved aerodynamics. It was touted as the greatest gain in drag reduction and as a byproduct, let’s be honest… it looks unbelievably cool. Air was fed from underneath the front bumper with zero negative effects on cooling the raging beast under the bonnet. The outcome of all this work was outstanding to say the least. Never before had something so handsome and chiseled offered up so much spine-tingling power and fury. Top speed was 170mph (in 1977..!?!). Aston had created the fastest production-car in the world.

Back in 2009, I had the rare privilege of riding shotgun on a short B-Road blast throughout the hills surrounding the Knockhill Racing Circuit in Scotland. To say that my senses were introduced to an all-new level of blinding exaspiration would be merely grazing the knife across the butter… This was purely maniacal stuff. Of course, I have had previous driving/passenger excursions within variously riotous and seethingly angry American muscle-cars from the ’60’s and ’70’s up until that point, but this was something right from the pages of Oh-my-God-this-thunder-has-killed-anything-I’ve-heard-before.

I was purely annihilated in the most loveliest of ways… The sound (and shove) was blistering and almost frightening. My gawping mouth could not be shut no matter how hard I tried, for everytime we rounded a bend and my Scottish friend buried the throttle into the carpet, the orchestral might of that V8 hitting 6000rpm’s was enough to extract uncontrollable laughter from somewhere inside of me. ‘Floored’ doesn’t even begin to describe what I was feeling when we eventually pulled over at a lay-by.

But ‘forever honoured’ are the words I would happily use to describe what I felt when he kindly told me to get out and swap seats with him… Good. Almighty. Heavens. This was about to become a slice of dreamlike motoring nirvana that you only…well… only have in your dreams. While I adjusted the steering wheel and gazed out over the imposing power-bulge on the hood, I was momentarily reminded of the classic early 70’s Mustangs of the era. And that muscle-car ‘feel’ in a genuinely British environment rattled through my brain for the next few seconds before I dipped the clutch of the rumbling beast and barely administered any revs to get it rolling (nearly 380 lb/ft of torque surely helps). 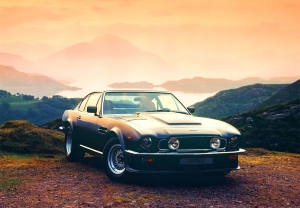 As I expected from a car with this much torque on tap, you barely need to change gear as you ride the wave of seemingly endless power. What an absolute thrill. Back towards Knockhill we went, and I savoured every single moment of it. The Vantage spitting and popping out unburnt fuel on the over-run and urging you to open the baritone taps to expel the silken growls and ravaging howls within the rev-range… Again, I was speechless… and eventually sleepless. 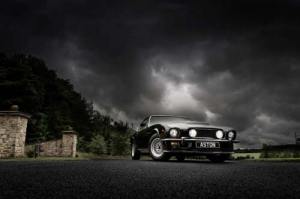 I had originally come to Scotland to drive a TVR for 4 days (future A.I. feature) but little did I know that a chance 15 minutes behind the wheel of an original Aston Martin V8 Vantage would come to define this particular driving-holiday of mine. All I could think about when I returned back home was how badly I wanted to own one, one day. It had entered its place within my Petrolhead bucket list. I bow down to thee…

This entry was posted on Thursday, September 22nd, 2011 at 10:59 pm and is filed under Car P0rn, Performance, Style, Supercars. You can follow any responses to this entry through the RSS 2.0 feed. You can leave a response, or trackback from your own site.